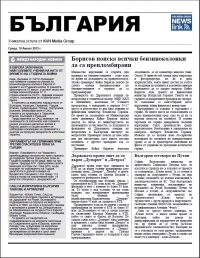 The Balkan editions are available in each country's language, such as Bulgarian

KVH Media Group has added a range of new titles to its NEWSlink portfolio with the launch of four daily editions focusing on the Balkans region, for Romania, Bulgaria, Serbia, and Montenegro.

{mprestriction ids="1,2"}Each title covers daily news, sports and entertainment stories from those States, and is available in the native language of each country.

The Balkan editions are standard four-page newspapers delivered seven days a week, similar to most other currently published NEWSlink titles, and will also be made available later this year on KVH’s IP-MobileCast content delivery service.

“The Balkans area provides a large proportion of the world’s seafarers and whilst we have covered these countries with our English-language versions, we are again responding to feedback from our customers that providing crew with news from home in their own language goes a long way to make them feel more connected to life back home,” said Mark Woodhead, managing director of KVH Media Group.

“As we reach the second anniversary of the ratification of MLC-2006, we remain focused on key welfare requirements for seafarers, and believe that sometimes it’s the thoughtful but important touches such as providing a daily news service, that can sometimes make a big difference for many seafarers away from home for months on end.”{/mprestriction}