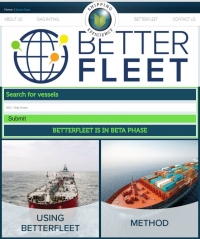 Carbon War Room, exactEarth, and University Maritime Advisory Service (UMAS) have launched a new free-to-access ship operational efficiency portal called BetterFleet, which aims to show how efficiently an individual vessel has operated over the past year in comparison with similar ships.

{mprestriction ids="1,2"}The portal, accessible via the www.shippingefficiency.org website, presents its findings based on similar data and methods to those used by the International Maritime Organization (IMO) to assess the world fleet, to understand the comparative energy efficiency of different vessels and to identify actions to reduce emissions and costs.

“Shippers and cargo owners often specify how the ship must be run, how it is loaded, and what schedule it adheres to. These factors strongly affect operational efficiency,” said Galen Hon, shipping operation manager with Carbon War Room.

“This is particularly true in the time charter market, where the cargo owner hires the entire vessel. It can also be true in the spot market, where supply chain demands can indirectly determine how ships are operated. BetterFleet delivers greater understanding to shippers and charterers of the impact of their supply-chain demands on ship efficiency.”

“BetterFleet illustrates where and how much efficiency varies for ships, in order to identify potential sources of inefficiencies, find opportunities to optimise operations, and reduce costs for everyone. It will also empower owners to begin conversations with their charterers and shippers about how operations affect the bottom line, carbon emissions, and the environment.”

The portal will allow any registered user to search by ship name or IMO number to see the performance of that vessel over a 12-month period, with metrics and visuals displayed to provide an overview of the ship’s operation.

An ‘out of ten’ score summarises the overall performance of the ship over the year compared with ships of similar type and size, and an overview of the magnitude and frequency of estimated operational efficiency variations for the individual vessel is presented, as well as for all similar vessels, measured in grams of CO2 per tonne-mile of freight transported.

A world map depicting the voyages of the vessel over the same time period is additionally included.

BetterFleet is based on AIS data and the publicly available data processed through models similar to those used for the Third IMO GHG Study. The founders say that the portal currently includes a large portion of the tanker, bulk carrier and container ship fleets, with more vessel types and sizes to be added over time.

Captain Kavil Madhu Nair, vice president, Rickmers Shipmangement (Singapore), who trialled BetterFleet prior to launch, commented: “Ships now operate in a world where effective decision-making is more vital than ever, affecting trading relationships, the environmental impact of transporting goods and the bottom lines of owner, operator and shipper alike.”

“In this world, transparent and consistent information is becoming increasingly important, with access to operational efficiency data a key consideration for forward-looking organisations.”

“By launching BetterFleet and making operational efficiency data available to the masses, shipowners and managers will be able to make the case for greater operational efficiency to charterers and shippers, who drive the demand and determine how vessels are run in most cases. It will also boost the commercial offering of efficient operators and managers by demonstrating they are able to work with their shippers to run ships as efficiently as possible.”

The BetterFleet project has been funded by a grant from the Dutch Postcode Lottery, which recently granted €1 million to Carbon War Room and Rocky Mountain Institute to expand their work in the shipping industry.{/mprestriction}