Maersk IT systems offline after cyber-attack 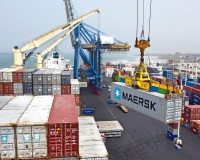 Shipping giant Maersk has fallen victim to a coordinated international cyber-attack affecting businesses across the world, causing the shutdown of IT systems across its business units as the company responded to the breach, which it says is now “contained.”

{mprestriction ids="1,2"}“We can confirm that Maersk has been hit as part of a global cyber-attack named Petya on the 27 June 2017. IT systems are down across multiple sites and select business units,” Maersk said, in a statement on Tuesday.

“We have contained the issue and are working on a technical recovery plan with key IT-partners and global cyber security agencies.”

“We have shut down a number of systems to help contain the issue. At this point our entities Maersk Oil, Maersk Drilling, Maersk Supply Services, Maersk Tankers, Maersk Training, Svitzer and MCI are not operationally affected. Precautionary measures have been taken to ensure continued operations.”

By 19.00 CEST on Thursday 29th, two days after the attack, Maersk confirmed that it had resumed taking online bookings through three different avenues – INTTRA, EDI (electronic data exchange) and an online booking form.

A number of APM terminals were also affected, and by Thursday evening that situation had not yet been resolved, though Maersk said that the impacted terminals had “implemented business continuity plans”, and that its operations teams were “carefully implementing IT solutions that will restore full operations.”

The Group stressed that there was no impact on safety for the company’s Maersk Line vessels, which it confirmed were all manoeuvrable and able to communicate following the attack, with all crews reported as safe.

“We continue to assess and manage the situation to minimise the impact on our operations, customers and partners from the current situation,” Maersk’s statement continued.

“Business continuity plans are being implemented and prioritised. The aggregate impact on our business is being assessed.”

The Petya attack has caused serious disruption across the world, using ransomware to encrypt computers at large firms in the US and Europe, and demanding a ransom in Bitcoin equal to approximately $300 to have them unlocked.

A number of oil firms, construction companies, legal services providers, medical facility operators and even advertising agencies have been reported as having been breached in the attack.{/mprestriction}