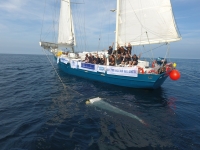 The sailing yacht Fantastiko, a research vessel operated by the charitable organisation ‘By the Ocean we Unite’, has been outfitted with a range of shipboard systems by ABB to manage voyage planning on a research voyage in waters off Rotterdam, the South of England, the Channel Islands, France and Belgium.

{mprestriction ids="1,2"}A Marine Advisory System, including SPOS Onboard weather routing software from MeteoGroup, has been implemented to help crew plan routes and monitor weather conditions during the yacht’s mission to highlight the damage done by the millions of tonnes of plastics that end up in the world’s oceans every year.

“Today, it is estimated that 23,000 kilos of plastics are dumped into the world’s oceans every single minute,” said Thomas van Thiel, By the Ocean we Unite (BTOWU).

“These materials are fragmenting into ever smaller particles, damaging the marine environment and marine life, and entering the food chain. Plastics also act as sponges to other toxic chemicals already in the seas, concentrating areas of pollution.”

“Removing plastics from the oceans is not currently feasible, but we must identify sources and effects because prevention is not only the better option, but cheaper than cleaning the oceans.”

During the 17-day voyage, scientists on board will research first-hand the sources of and impact made by plastic pollution in one of the busiest seaways in the world.

ABB is a partner of the campaign, and hopes to publicise the research by making voyage data available through its online Marine Fleet portal, which links to the BTOWU website.

“As a technology group, ABB is committed to technologies that are compatible with sustainability, but we are also delighted that our marine software is being used directly in the battle to protect the marine environment,” said Bart Cunnen, vice president of the ABB Benelux Marine & Ports organisation.{/mprestriction}