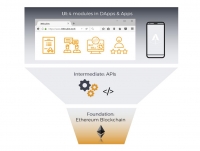 The 300cubits infrastructure will be built on the Ethereum blockchain 300cubits

A Hong Kong-based firm has launched a cryptocurrency specifically for the shipping industry, built on the already established Ethereum blockchain, which will begin its initial coin offering (ICO) on August 16th.

Mr Leung has previously worked in the maritime sector with Maersk Line and Hutchison Port Holdings, as well as in finance in roles with JP Morgan, Tufton Oceanic and Jefferies. Mr Lee has 20 years of banking and finance experience with firms like Union Bancaire Privée (UBP), Coutts & Co, Shanghai Pudong Development Bank and China Construction Bank.

The cryptocurrency being launched by 300cubits will be made up of ‘coins’ called TEU, which the founders are hoping will be used as collateral in shipping transactions. By using blockchain technologies it should be possible to trust and verify transactions without requiring the services of middlemen, such as banks, for escrow or other guarantees of payment upon contract completion.

“To start, we will promote TEU tokens as the deposit for the shipment booking process, which creates US$23 billion annual wastage today,” said the 300cubits founders, in a statement.

“Unlike ticket booking in airlines, customers in container shipping do not bear any consequence for not showing up for bookings. Industry people complain (of) the lack of trust between liners and customers. We think the trust-free nature of Ethereum is just the solution container shipping needs. A TEU Ecosystem will be developed to help seamlessly implement TEU tokens into the daily operation of the industry.”

TEU tokens will be available to purchase using ‘ether’ coins (ETH) produced by the existing Ethereum cryptocurrency, with a first pool of 10,000,000 TEU to be made available between August 16 and August 30.

The minimum contribution allowed to participate is 0.1 ETH, which is worth approximately US$22 at the time of writing. The value of each TEU purchased will depend on the total amount of ETH contributed during the token sale.

The total supply of the coins will be set at 100,000,000 TEU, with some 54 per cent of that total to be retained for marketing and development use, and 6 per cent being held by the company founders.

From its 54 per cent marketing and development stake, 300cubits says that it will distribute a certain number of tokens for free to container lines and their customers, as well as other parties that “actively promote” early adoption of the cryptocurrency.

Software development will continue over the course of the year alongside token sales, with 300cubits targeting a January 2018 Alpha launch for its first Booking/Smart Contract Builder module, ahead of a live launch of the application in April next year.

Notably, 300cubits says that residents of both the US and Hong Kong, where the company is based, will not be able to participate in the initial token sale.{/mprestriction}