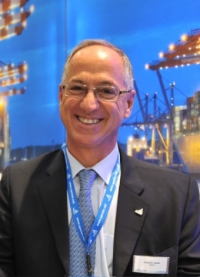 “There is no doubt today that, through the digitalisation revolution, shipping is going through an incredible transformation period. Shipping is a highly competitive environment and, with lower profits, to remain competitive there are few solutions – economies of scales, strict cost control, total efficiency,” Mr Soncini told Digital Ship.

“As shipping companies grow, they will need to be extremely controlled and controllable in all they do. And they will have to push efficiency to the extreme, given the actual margins. Moreover, given the remote nature of its assets, shipping has always relied on trust to be sure that all ships were managed the right way. But in today’s world, this trust must be controlled, as the world has become unforgiving, whether it comes to hackers, pilferage or mistakes.”

“The leaders (in innovation in this area) today are Rolls-Royce, Kongsberg, DNV GL, and a few others. RINA’s aim is to be within the top five, and to be a reputed and trusted advisor to all its customers on all matters regarding innovation and IT.”

The issue of unmanned ship development in particular is one that Mr Soncini says he is keen to focus on, something he believes will inevitably result as from the natural evolution of technology in the industry.

“I stated in many conferences that I thought it was absurd to have a ship with 20 people on board, and a cook, a galley, with all the attached problems of fridges, garbage, fire hazards and costs. The elimination of the galley will be the first step towards ships with five crew, (and this will continue until we) allow crewless vessels. These ones will come much later than the first ones,” he said.

“Who, today, wants to be at sea for months and months? It is getting more and more difficult and expensive to get prepared crews. But the main reason will be that automated ships put all players at the same playing level. The economic advantage will come from better managed ships, and not from differences in crew wages.”

Mr Soncini is also keen to note that his departure from his previous role at SpecTec’s parent company Volaris Group has been amicable. He moved from his position as SpecTec CEO to become director of Volaris’ marine division after its acquisition of SpecTec in 2016, and was put in charge of further group acquisitions in the industry, such as the purchase of ShipNet in 2017.

“There are reasons, of course, for me deciding that it was time to move on and out. And it was not easy – I loved SpecTec, and ShipNet, which was acquired by Volaris in March this year. And I had an excellent relationship with Volaris, which is a great company with impressive economic performances, part of a group, Constellation, which this year has been listed in 22nd position by Forbes magazine of the first 100 most innovative companies in the world,” he said.

“(However), being responsible for acquisitions only was not my turf. I wanted to be on the driving seat, and innovate what we were doing.”{/mprestriction}