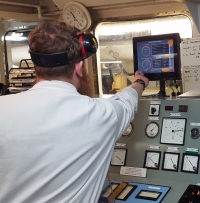 {mprestriction ids="1,2"}Devised in cooperation with marine engineering specialists from Newcastle University in the UK, the ecospeed algorithm is based on speed modelling and analysis of vessel operating data, correlating and synchronising information from different sensors installed on the ship.

A unique optimum performance profile is calculated for each individual vessel by analysing a range of data including fuel use, speed and distance, as well as sea state, wind speed and current.

This information is gathered during a dedicated sea trial or from a vessel’s existing enginei system installation, and is used to identify optimum vessel speeds in different conditions to ensure maximum fuel efficiency. As well as fuel consumption, the software module also provides details of carbon emissions and voyage duration.

The enginei EFMS system records fuel consumption data by individual engines, presented via touchscreen monitors installed on the bridge and in engine control rooms. The data is also sent to shore, where it can be accessed through a web dashboard.

“Our onboard tests and pilot ecospeed installations have shown that systematically identified economic speeds are invariably different to crew perceptions based on their experience and can have a significant impact on fuel use and costs,” said Damian McCann, product manager for enginei fuel management systems at Royston.

“In addition, linking fuel use with CO2 emissions using the carbon emissions factor for the appropriate fuel type also provides the means to ensure that potential environmental impacts are minimised.”

“As a result, the new ecospeed EFMS feature provides an essential means of helping vessel operators to accurately identify optimum voyage speeds in the interests of both maintaining fuel efficiencies and complying with emissions regulations.”{/mprestriction}