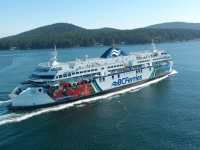 BC Ferries cruise vessel. Image courtesy of BC Ferries

BC Ferries has opted for NAPA’s electronic logbook as a fleet-wide standard solution with the aim to decrease workload and human error.

{mprestriction ids="1,2"}NAPA Logbook is a PC application that can be used from any onboard computer. Users can search any official logbook event for authorities, filter results with keywords, make calculations based on automation signals and check values against boundary conditions.

As the logbook replaces all paper logbooks, time is saved and human error is reduced. Transparency is increased as all data can be recorded and viewed on and off shore and the logbook can be integrated with NAPA’s onboard monitoring, voyage reporting and other applications.

BC Ferries chose NAPA’s logbook after a thorough tender process and pilot installations on the company’s Coastal Celebration and Northern Expedition in 2016 and on three of BC Ferries’ Salish class ships during 2017. Installations have continued during 2019 and NAPA Logbook will be in use on more than 20 BC Ferries ships by the end of 2020.

NAPA Logbook will also be available on the new NAPA Mobile smartphone interface, meaning reporting can be completed anywhere around a ship.

“Nobody likes paperwork, but for hundreds of years it has been an arduous reality for every seafarer. NAPA Logbook leaves those days in the past. It delivers everything you’ve come to expect from a paper logbook while also delivering major benefits to its users in terms of time savings, data validation, and data sharing,” said Mikko Forss, director, Sales, Americas at NAPA.

This article was originally published on VPO Global.